Mises on the Social Security System, by Gary North

Ludwig von Mises was resented by several generations of economists, 1912 (Theory of Money and Credit) until his death in October 1973. 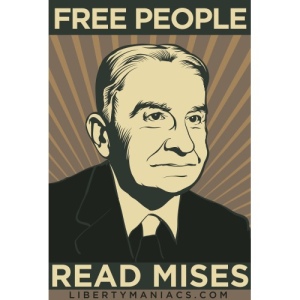 They had had reasons for this resentment. First, he held to a rigorously free market-based explanation of economic causation. They were statists. Second, he kept predicting things that kept coming true — events which his critics had denied would ever happen. This made him look good. It made them look bad. They resented this.

They wanted to bring him down a notch — more notches, if they could. This is always the motive of envy. Some of his critics were green with it.

Recently, I wrote an article on the decision of Yale University Press in 1963 to issue a grotesque edition of Mises’ masterpiece, Human Action (1949). It is a forgotten story, even within Austrian economics circles. You can read my article here: http://www.garynorth.com/public/10958.cfm.

Mises was resented. The extent to which he was resented can be seen in this scurrilous incident. It showed the petty vindictiveness of obscure, resentful men against a truly great thinker. It was pure envy at work. The editor of Yale University Press was willing to issue an ugly, amateurish looking book. He was willing to suffer the embarrassment of overseeing an incompetent typesetting job. Why? Because he was able to bring Mises down a notch, or so he thought. He was wrong.

Today, Mises is known around the world. The Ludwig von Mises Institute’s website has five times the traffic of the website of the American Economic Association, the premier organization of academic economists.

The petty men who sought to bring him down a notch were not known by many people in their day. Mises was. Today, they are not even long forgotten. They were never known by enough people to have become long forgotten. Mises is better known today than he was in his lifetime. This almost never happens to anyone, and surely not someone in academia, where fads come and go, and so do reputations.

SOCIAL SECURITY: Late in the 1949 edition of Human Action, which is online for free, he offered an analysis of the political foundation of the Social Security System. This program has been described as the crown jewel of the American welfare state. He exposed this jewel as made of glass — and not Steuben glass. It is more like the glass used in mirrors, as in “smoke and mirrors.”

In the process of government interference with saving and investment, Paul in the year 1940 saves by paying one hundred dollars to the national social security institution. He receives in exchange a claim which is virtually an unconditional government IOU. If the government spends the hundred dollars for current expenditure, no additional capital comes into existence, and no increase in the productivity of labor results. The government’s IOU is a check drawn upon the future taxpayers. In 1970 a certain Peter may have to fulfill the government’s promise although he himself does not derive any benefit from the fact that Paul in 1940 saved one hundred dollars. Thus it becomes obvious that there is no need to look at Soviet Russia in order to comprehend the role that public finance plays in our day. The trumpery argument that the public debt is no burden because “we owe it to ourselves” is delusive. The Pauls of 1940 do not owe it to themselves. It is the Peters of 1970 who owe it to the Pauls of 1940. The whole system is the acme of the short-run principle. The statesmen of 1940 solve their problems by shifting them to the statesmen of 1970. On that date the statesmen of 1940 will be either dead or elder statesmen glorying in their wonderful achievement, social security (pp. 843-44).

Today, the present value of the unfunded liabilities of Social Security and Medicare exceed $222 trillion.

Mises fully understood in 1949 what the program was producing: government-issued IOUs that cannot be paid off. His academic peers denied this when they mentioned it at all, which was rarely. Their spiritual heirs also do not mention it. But the numbers keep growing relentlessly. The red ink is like a lake behind a dam — a government-built, government-insured dam with cracks in it.

The Social Security program was only a decade old when he wrote this brief critique. He was an immigrant from Austria by way of Switzerland. His critics asked: “What does he know?” He was not taken seriously by critics, but his readers took him seriously. They still do.

The Social Security/Medicare programs are the biggest Ponzi schemes in history. They are imitated throughout the West. They will all produce the same result: default. When this happens, Mises will be seen as prophetic. He was not prophetic. He merely (1) understood economic causation and (2) followed the logic of his reasoning. But in an intellectual world governed by  the man of economic understanding looks like a prophet.