Is there Another Race Other Than the Human Race?

Christians cannot be racist. For there is only one race, the human race.

In the beginning God created the human race. Male and female created He them.

Then the evolutionists (1859 when Charles Darwin published his book On the Origin of Species by Means of Natural Selection or the Preservation of Favoured Races in the Struggle for Life) rejecting God and having to come up with another theory for all that is around them, concocted a theory that all life began from innate materials. Over billions of years these life forms evolved into chimpanzees and gorillas. Then, according to the evolutionary theory, the gorillas became the Australoid race, then the Negroid race, then the Mongoloid race, and finally the Caucasoid race. So, when our news is being flooded today with terms such as “racism,” “racist,” “race wars,” etc., they are only perpetuating the evolutionist dogma.

The differences between one human being and another (members of the human race) are merely superficial. That is, it’s all on the surface. Humans are all the same inside. 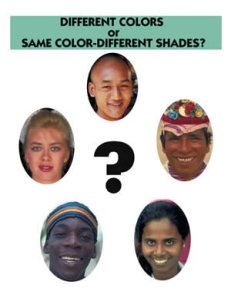